A tanning addict was left with a hole in her nose after a pink pimple on the end turned out to be skin cancer that needed to be cut off.

Laure Seguy, 35, admits she sunbathed without using protection for decades, until 2018 when she noticed the small red mark that was 5mm big.

Over the coming months, the spot intermittently bled then scabbed over again – a process that repeated itself several times.

Her GP was concerned and she was fast-tracked to see a dermatologist who diagnosed basal cell carcinoma, a slow-growing form of non-melanoma skin cancer.

After having the tip of her nose sliced off by surgeons, Mrs Seguy, a yoga teacher, had two operations involving a reconstructive skin flap from her hairline. 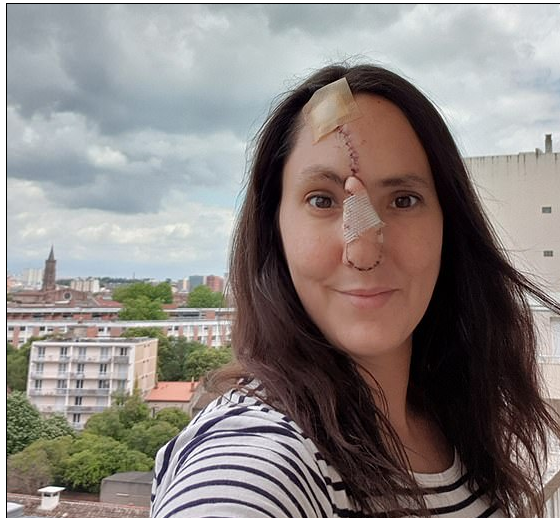 Instead of exposing her bare skin to the 30°C (86°F) summer temperatures where she lives in Toulouse in the South of France, Mrs Seguy now avoids direct sunlight.

A biopsy of the pimple in November 2018 revealed she had basal cell carcinoma, which is more common but less dangerous than melanoma skin cancer.

Mrs Seguy was told it was fine to wait until May 2019 to have the first of her three procedures as she was doing a yoga teaching training course.

When May arrived, Mrs Seguy had 11mm off the end of her nose cut off, removing both cancerous and healthy cells, to make sure all the carcinoma had gone.

A week later, having analysed the cells, surgeons at the specialist cancer hospital, the Oncopole de Toulouse, were confident Mrs Seguy was cancer free.