Just today, a 19-year-old Moscow college student stabbed his teacher to death following a dispute in the classroom then he went on to take a selfie of himself smiling over the dead body. Andrey Emelyanenkov had a dispute with his Basic Safety teacher, Sergey Danilov this morning. He then waited for the school break between lessons to attack. As soon as other students left the class, Andrey brought out the knife and launched the attack.

As the teacher lay in a pool of his blood, the unrepentant student took photos of the dead body and posted it online. But he did not stop there. He went on to commit suicide seconds after he posted the photo. When the police arrived, they found a knife and a chainsaw next to the bodies of Andrey and his teacher.

See the graphic photos below. 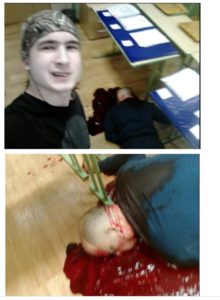