The prime suspect of the case concerning a lady who was stripped naked by a group of people and had pepper inserted into her private parts for allegedly stealing a mobile phone in Benin City, has reportedly been arrested.

According to a report by Barrister Jefferson Uwoghiren, who has been on the case since the video of the lady being tortured went viral, the man was arrested on Wednesday evening, along with the manager of a hotel he lodged briefly in Benin City, Edo state.

In his report, Uwoghiren stated that the prime suspect who had been with the said lady, had complained about a missing phone. He then forced the victim to a native doctor around Ugbiyokho area of Ekehuan Road, Benin City, to determine if she was guilty or not.

The victim was instantaneously pronounced guilty and asked to produce the missing phone, before being tortured.

Read the report below.

The middle aged man that mobilized thugs and street animals to rape and sexually molest a young girl in a trending video has been arrested. He was arrested this evening, along with the manager of a hotel he lodged briefly.

His arrest this evening, opened the lid on the motive and participants involved in the sordid attack. The suspect was temporarily and amorously linked with the victim and subsequently complained of a missing phone. He collared the victim to a native “doctor”, around Ugbiyokho area of Ekehuan Road, Benin City, to determine the culpability of the victim.

As customary with these fake and useless native “ doctors “, the victim was instantaneously pronounced guilty and asked to produce the missing phone. Victim’s denial and protest fell on deaf ears. The suspect, native “ doctor” and apprentice native “ doctors” pounced on the victim , beat her up, striped her naked, and procured granulated chilly pepper, popularly called “ Akpoko” in local language and inserted it into the victim’s private, all dramatically caught on video.

A massive manhunt is on for the fake and useless native “ doctor” and his apprentices . 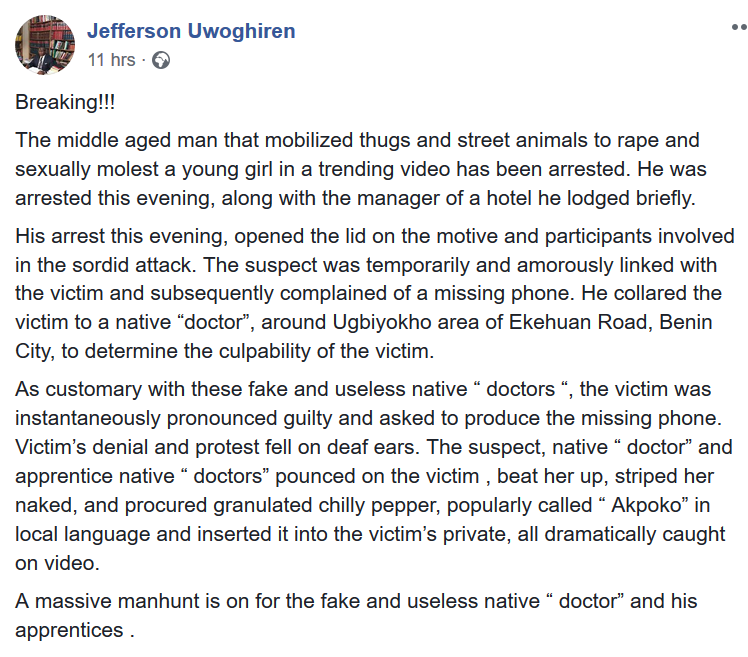