Disclaimer! First of all, y’all know I am not a urotherapist. But what got me interested in this, is the fact that Harvard medical researchers including doctors have written in journals that Urine can cure cancer, hepatitis, asthma, migraines, and whooping-cough as reported by guardian.ng even though there is a claim that there is no scientific evidence to support its use.

So, I was curious to know more about this elixir. I mean this particular type of medicinal solution and I realize urine therapy is quickly catching on. So, I found out that one in four people drink their urine. That, urine is not a dirty and toxic substance rejected by the body. That, urine is a by-product of blood filtration, not waste filtration and medically it is referred to as “plasma ultra-filtrate”. It is a purified derivative of the blood itself, made by the kidneys–whose principal function is not excretion but regulation of all the elements and their concentrations in the blood. Urine can be compared to leftovers from a meal, and this metaphor may help us understand why our bodies excrete elements that are valuable to our health and well-being.

Celebrities like the Pop singer Madonna in an interview explained she treated athlete’s feet by urinating on her own feet. Arsenal footballer, Alex Scott; former England footballer, Stuart Pierce had drunk their urines at some point in dealing with certain health issues and. Four-weight world boxing champion, Juan Marques drinks his urine after he has had a fight or his daily workout to replenish his system among others. Sarah Miles, a famous British actress, has been drinking her own urine for about 30 years and she claims that it can immunize her against allergies and other diseases.

I’m like what! Stink? Dirt! Why would I want to put myself through such drinkable cruelty? Who does that? The word itself signifies filth and impurities plus the fact that urine has been treated as something dirty and as an impure form of liquid, something that must go to gutter immediately. Then I realized this is obviously not for the faint-hearted. Uro-what? I saw a comment where someone goes “I have found my own urine to be an effective wound dressing, having healed a severe cut on the end of my finer with little scaring”

Now, urotherapy, urinotherapy, or uropathy or auto-urine therapy, in alternative medicine, is the application of human urine for medicinal or cosmetic purposes, including drinking of one’s own urine and massaging one’s skin, or gums, with one’s own urine.

History has it that urine has been believed useful for diagnostic and therapeutic purposes in several traditional systems and references have been to medical texts such as auto-urine therapy as a system of alternative medicine by British naturopath John W. Armstrong in early 20th century, The Water of Life of 1944 which is full of case histories of people who healed themselves from a variety of diseases with fasting and drinking their own urine and even Armstrong himself who cured tuberculosis in permanent remission as a young man in 1918 and lived up to 85 years among others.

a) Drinking urine strengthens a person’s immunity and cleanses the system. It detoxifies the system of harmful toxins which dependent on how much toxins are in a person’s body. But, it is advised that ONLY the middle stream of your urine is good for drinking and is believed to be potent and a potential cure for many ailments as the first and last stream (few drops) of urine be avoided because they might contain infections.

Be cautious when drinking your urine. Too much of it can cause fatalities because of the presence of nitrogen and potassium. Spices can make urine difficult to drink due to the resulting pungent odor and taste.

b) Slows down the aging process: Urea is sometimes added to creams and beauty products for dry and rough skin. Some claim when applying urine on your neck and face, it helps get rid of wrinkles while you maintain a glowing, youthful look. Many users of urine reported having softer skin after a few weeks. 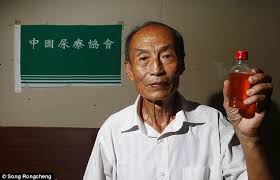 c) Acne Treatment: According to various comments by those who have tried it, urine as an exfoliator and facial cleanser helps get rid of acne and eczema. Some of them claim to have collected the first urine of the day, get a cotton ball and apply it to the affected skin area and that they treat it like a toner and leave it for about ten minutes and then rinse. Some claim they wore it wear it overnight because it was comfortable. The weirdest part is leaving it for a few days till turned into a concentrated solution when they used a cotton swab to apply it to the area with acne scar. Some claim they use it as a hair shampoo and does not only cleans the hair follicles, it’s also eliminates dandruff and promotes hair growth, it does not tangle the hair. 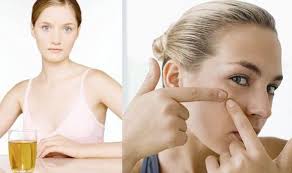 d) Relieve sting and burning wound: You may have heard about people who get sting by bee, jelly fish or sting ray. People used to rub the wound of the sting with urine if they don’t find any other antiseptic around them. The anti-inflammation effect of urine can help the body to remove pain caused by sting and heal it faster. Urine is also effective to relieve wound which caused by burn.

You may want to try it though. In the end, life is about choices. But if you want to try at all, I’ll advise you do that under the strict prescription of an experienced urotherapist as side effects could include rashes, itches, headache, soreness, fatigue, pain and sometimes fever which may be more severe when the person has certain diseases. You can as well read more that anyway. Google for books on top selling Urine Therapy Books. Yuck!