Arsenal are close to agreeing a fee of around £60m for Pierre-Emerick Aubameyang with Borussia Dortmund, according to Sky sources.

It is understood that talks are ongoing between the clubs, but a deal has not yet been reached for the striker.

Arsenal had a bid in excess of £50m rejected, with Dortmund’s sporting director Michael Zorc saying they would only let the 28-year-old go if their demands were met. It is understood they are holding out for £60m.

One source told Sky Sports News on Sunday night that Arsenal striker Olivier Giroud may yet be involved in a deal to bring Aubameyang to the Emirates.

Arsene Wenger said on Friday that Giroud would not leave unless another player came in.

“Arsenal have made several attempts so far [to sign Aubameyang] and they have all been rejected,” Zorc told Sky in Germany on Saturday.

“Either our demands are fulfilled, then there can be another transfer, or they will not be fulfilled and Aubameyang will play in Dortmund until the summer. 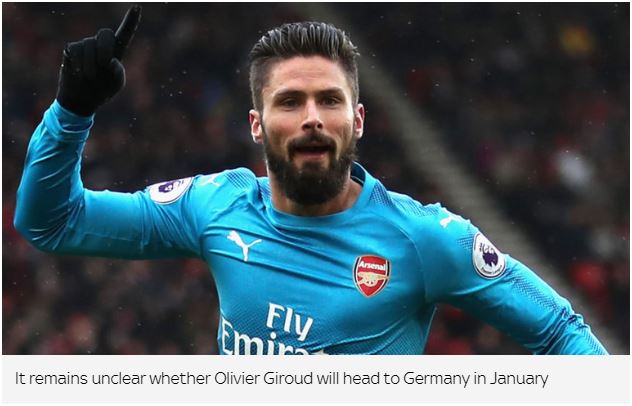 Aubameyang was booed by a section of Dortmund fans at the Westfalenstadion during their 2-2 draw with Freiburg on Saturday and a banner in the crowd read: ‘No player is bigger than our club’.

Sky Sports News understands Chelsea have also been monitoring Giroud’s situation as they continue their hunt for a target man.