Coleen Rooney has slammed claims from ‘so-call friends’ suggesting she has decided to give her husband Wayne ‘one last chance’ after facing cheating allegations. The WAG took to social media on Tuesday night to slam reports suggesting she had been battling to save her nine-year marriage to the footballer. Posting a series of Tweets, Coleen said she would like to know the ‘sources’ who claimed she was attempting to save her marriage for the sake of her three sons and their unborn child. 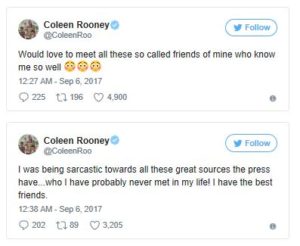 The mum-of-three made reference to the number of stories that had been printed about her marriage, with supposed friends suggesting she was prepared to give Wayne another chance. She said: ‘Would love to meet all these so-called friends of mine who know me so well.’ After facing questions from fans, Coleen clarified what she meant by writing: ‘I was being sarcastic towards all these great sources the press has…who I have probably never met in my life! I have the best friends.’ Earlier in the same day Coleen avoided speaking about the marriage split rumours to post about her second child Klay, aged four, and his first day of school.

Sharing a photo of her son all dressed up in his new uniform, Coleen wrote on Twitter: ‘Big school for my gorgeous Klay!’ Last week a woman named Laura Simpson spoke out after Wayne was arrested on a drink-driving charge while driving her car. She claimed that she and the Everton footballer had kissed and would have spent the night together had he not been arrested. Coleen and Wayne have been married for nine years and first started dating when they were just 16-years-old.

The couple have three sons together, Kai, seven, Klay, four and one-year-old Kit, and Coleen recently confirmed that she is pregnant with their fourth child.